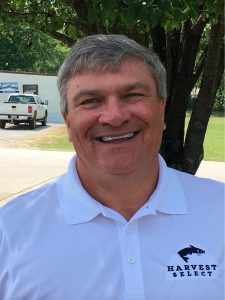 I think if Mark Hasty had his way, he’d be on the golf course morning ‘til night. Lucky for us, he’s selling catfish instead (a man can dream, right?). Growing up in Linden, Alabama, the only real exposure Mark had to farm life was occasionally helping out on a cattle farm owned by a man he calls his “second dad.” John Payne Thomas was Mark’s Little League baseball coach, and mentor, whom he later named his son Payne for.

Mark went on to graduate from Auburn University with an Agricultural Economics degree but began his career in Valdosta, Georgia selling pharmaceuticals. He enjoyed the work so much he stayed at it for 15 years, but when both his mother, and father were simultaneously diagnosed with cancer, he and wife Amy, along with son Payne, and daughter Sydney, moved back to Demopolis to care for them. 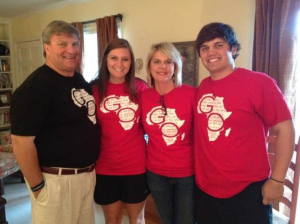 With the move came a job change. Mark started his own company, selling medical devices which he ran for nearly two years. Sadly, it was during this time that both parents succumbed to their disease. He was then offered another job in pharmaceutical sales which he was happy to accept. As Mark recalls, “all that was left was the paperwork”. It was a Friday and Mark was due to begin the new job the following Monday when he received a call from VP of Sales, Andy Thornton at Southern Pride Catfish. The call literally came out of left field as Mark’s name had been tossed to Andy by fellow softball parent Michael Patterson, who had worked for Southern Pride. (Mark and Michael’s daughters were softball teammates).

Andy wished to recruit him, but Mark explained his situation, adding that in fact, he had an appointment to fill out paperwork at three o’clock that very day. Andy persisted. So much so that he promised to be in Birmingham by two o’clock with an offer. After a long weekend of intense consideration, Mark and Amy, his wife of 31 years, made the decision. Catfish it was.

Mark joined the team at Southern Pride and served as a Regional Sales Manager for nearly 8 years. Eventually the company was sold and the very day he left the company he met with Harvest Select President Randy Rhodes. He took 6 weeks off to do what else? Play golf of course! And then he made the move to Harvest Select.

There are three distinctly different types of “typical days” for Mark. One is the “office day” where he fields phone calls and emails and catches up with customers. He is also heavily reliant on sales coordinator Christie Wilburn and customer service representative Sissy Compton. The two are invaluable in keeping Mark and the rest of the sale force informed on inventory availability or lack thereof.

Another is the “field day” where he is traveling, which can account for up to 50% of his time. On these days Mark is meeting with distributers such as Sysco, retail accounts like Albertsons or visiting restaurants to establish relationships with big catfish end-users.  In addition, Harvest Select has a broker network spanning the country. Mark’s territory, from Mississippi all the way to Seattle is in large part managed by this team of brokers. “They are our boots on the street, and a huge part of our success is due to the outstanding job they do.” In fact, Mark was greatly impacted by one such broker, a mentor to Mark in many respects, Glenn Kokel. “Glenn was the first broker I worked with more than 15 years ago and I’m pretty certain that man has sold more catfish than any other man alive. He taught me the restaurant side of the business through pounding the pavement together. We share a similar philosophy; ‘Always be honest with your customer, under promise and over deliver.’”

His remaining time is spent in the plant discussing new projects for customers, tweaking specs for existing customers and discussing fish size and yield with VP of Operations Bobby Collins and General Manager Lee Stewart. These days in the plant dictate where sales efforts should be focused.

Always a team player, Mark most enjoys the relational aspect of working at Harvest Select. He deeply values the relationships he shares with his co-workers, as well as with his customers. He strives to take a team approach with his customers, noting that a non-adversarial relationship “leads to less stress. And I like less stress.” He continues, “the key to sales is that people buy from those they like and trust. If you keep them up to date, establish that relationship, and keep their best interests in mind they will buy from you consistently. If we are both doing our jobs well, we both look good. It’s that symbiotic relationship that makes it work. It doesn’t hurt that we also offer the very best quality product available. One of my favorite quotes is, ‘You can always apologize for pricing, but no apology can account for poor quality.’”

Mark speaks highly of his fellow sales team members. “I’m lucky that I am working with a fantastic sales team that is led by Michael Locascio. Michael is a high energy guy who is always thinking of new ways to do the old things better. He provides a great atmosphere to allow the sales force to excel at our jobs.   Johnny Price is known in the industry as a man of impeccable character who really dedicates himself to doing a great job for both Harvest Select and his customers. I don’t think you could find one person in the industry that has even one bad thing to say about Johnny! Trey is our young bull. He has progressed a million miles in the couple of years that he has been in sales. He has a very long and bright future in the catfish industry.”

One of the most memorable events during his time in the business involved Kokel who had started his own brokerage firm and began representing Southern Pride. The two friends were on opposing “teams” during an interview session with a major food distributer who was seeking a catfish supplier for their Texas and Oklahoma divisions. As Mark put it, “it was as if the student and his master were in competition.” As it turned out, that time Glenn took home the prize but the two remain friends and years later Mark won that same business.

If Mark had to narrow down his works greatest challenges, fish size would top the list. “It is always a challenge finding ways to create profit when fish run really large. We are constantly striving to build a customer base that fits the size of fish that we have at any given time.” Another challenge and also the biggest change Mark has seen in the industry is the introduction of imported Pangasius which has taken over 50-55% of the catfish market. In fact, for every one case of domestic catfish supplied to the U.S. market, there are six of Pangasius. The USDA may be the key to flipping this switch. With increased awareness regarding food safety and a growing desire by consumers for traceability the U.S. catfish market is on an upswing. From 660 million pounds produced annually 11 years ago, plummeting to 280 million pounds in 2011-12, production is now on the rise, at 330 million pounds per year.

Mark has no intentions of slowing down his own roll anytime soon but he dreams of someday taking off to Scotland for a week of golf. For now he enjoys spending free time playing at the local club in Demopolis and traveling the state competing in tournaments. Some say that golf is a fine test of character. “When you do business with people, you need to know more about them, golf rewards players who remain calm under pressure, never lose their temper and think strategically.” It’s clear these virtues serve Mark well both on and off the green.