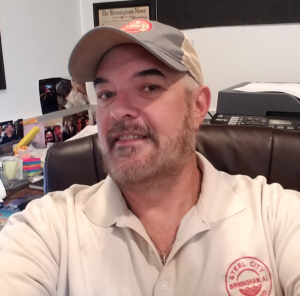 When Harvest Select acquired Birmingham based seafood enterprise, Steel City Seafood this past year, we gained more than just a seafood company. Lucky for us, longtime employee James Patrick Cary, known as Pat, stuck around to show us the ropes. Pat’s official title is Procurement and Production Manager, but if Pat had his way, he’d simply go by Fish Monger. The definition of the term is “a person or store that sells fish for food”. I personally think the term sells Pat short, as he actually does a little bit of everything. From assisting with seafood purchases, talking to the coastal fisherman on a daily basis, cutting orders, filleting, scaling, packing orders for restaurants, and being front man in the “cold room”, where fish is organized and kept fresh. (Not to mention keeping the place clean and educating folks about fish preparation).

Pat grew up in Gardendale, Alabama just outside of Birmingham. He hadn’t really set out to make seafood his life (he was trained as a welder), but after his time in the Navy he joined his brother Lee, for what he thought would be a temporary gig, at Lee’s father-in-law’s wholesale seafood company, Williams Seafood Company. This place, which had been in business since the early 1950’s changed Pat’s career path; he had found what he truly loved. Eventually Pat and Lee opened Snapper Grabbers Seafood Market in Vestavia Hills, AL and business went through the roof. The business supplied seafood to high-end area chefs and restaurants like Frank Stitt at the acclaimed Highlands Bar and Grill. They sold up to 30 different types of fillets, octopus, alligator, 10 types of shrimp, 3-4 types of scallops, 5 types of salmon, grouper…the freshest of the fresh. But after 10 years, and a tragic family loss, the pair were ready for a change of scenery. 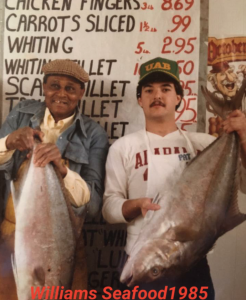 “I really loved retail. Talking to the customers, advising them about how to cook the product, selling, and making a profit. It was a good run.” Pat returned to the wholesale seafood business and eventually landed at Steel City Seafood. When the company went on the market, Pat considered heading for the coast. “But, he says, “the Lord blessed me, when Harvest Select came along and purchased the company, giving it new life.” “I love what I do. I’ve been doing this for 33 years and can’t imagine doing anything else. It’s hard work, but it’s what I do and it’s what I enjoy.”

A typical day starts early, to manage orders as they come in. Pat, and General Manager Chris Willis get together to discuss the day’s seafood requests and where they are most likely to find it. He then coordinates the processing and production of the fresh seafood at the facility. 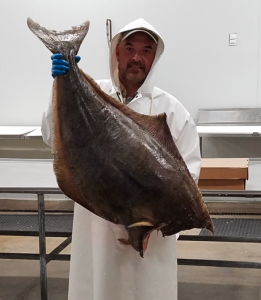 “That’s what I like about my job”, says Pat. “It changes every day. It’s not like knowing exactly how many chickens or cows are on the farm. You never know how many fish you’ll catch. So much is involved in procuring fresh seafood and there are factors like inclement weather that effect each day. If the boats can’t go out to get the seafood and the supply is low, prices and the quantity we are able to offer is effected. There’s a thrill to the chase, and in supplying our customers with the freshest top quality seafood available.”

The industry has changed a great deal since Pat’s early days in the business when most seafood was packaged frozen, especially further inland. As consumers desire to live and eat healthier has increased, the demand for fresh seafood has risen. Upscale chefs are looking for top-notch fresh fish. This has been a real game changer for Birmingham which is known now as a “foodie” hub.

One of the greatest challenges is the influx of imported, low grade product being passed off as domestic. “It may look exactly the same, but it definitely doesn’t taste the same.” “That’s my biggest peeve. Sell it as what it is and don’t sell an imposter for the same price as the high-quality stuff.” Cary says this even takes place on the coast with shrimp imports.

One of the highlights of his career thus far has been to witness the gulf bounce back after the BP oil spill in 2010. “People were afraid to eat anything from the gulf, the press was terrible and it was really tough on the people who’s lives are dependent on the sale of seafood. These people have worked really hard to clean up the environment and keep it protected and safe.” Numbers are back up, and oysters, which suffered most, have made a comeback. He adds that Bayou La Batre, the ‘capitol of Alabama seafood’ was especially hard hit. “This whole community is tied to fishing and they had some challenging times, but they are back on top.”

Another favorite memory is of being interviewed for a piece on Alabama Gulf Seafood and meeting former Alabama coach, Gene Stallings. Gulf Shores and Orange Beach Tourism were official SEC sponsors, and commercials involving Stallings and former SEC coaches Pat Dye (Auburn), Jerry Stovall (LSU), Frank Broyles (Arkansas) and Phil Fulmer (Tennessee) were running on behalf of the region during SEC football games. Cary says he and Stallings got to talking and “hit it off real well”. He’ll always remember how gracious Stallings was when he asked to take a picture with him. “He insisted on taking off his mic and standing for the photo. He’s just that type of guy.”

When he isn’t working, Cary enjoys fishing, or doing just about anything on the water. He loves camping and spending time outdoors and is a huge fan of Nascar. He is also raising three daughters, Emily, Capri (named for the time he spent in Italy during his Navy stint) and Tia, so his plate is full. When asked if the girls have any interest in the seafood business, Pat laughs. “They aren’t too fond of the smell. They used to say ‘daddy, you stink!’” They do however, like seafood but, preferably the fried variety from Captain D’s. Pat’s favorite dish to prepare is seafood chowder. “I make a mean seafood chowder with lots of shrimp and fresh fish” but his favorite seafood hands-down is King Crab. So much so that he says he’d make it his last meal for sure! 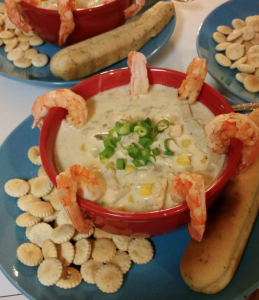