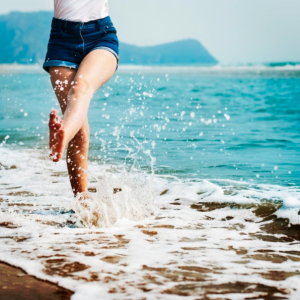 I know, the mere question can instill dread. But it is easier than you think! It’s all about diet and exercise, which we already know. But that doesn’t have to mean starvation and grueling, sweaty workouts. Think fruit (a crunchy, crisp, apple-a-day is my go-to), veggies (try a snack of carrots and hummus!), whole grains, lean meats (especially seafood), nuts (mix with raisins for your sweet n’ salty fix)…and an OCCASIONAL indulgence (we should consume less than 10% of calories per day from added sugars). Try a banana with a dollop of peanut butter instead of fattening candy or ice cream! It’s deliciously sweet and packed with protein. And don’t forget to drink your water! It’s washes away bloat, improves the complexion, and provides the purest hydration. If you still need a bigger nudge, it may help to know that the U.S Department of Health and Human Services and Agriculture issued guidelines that suggest that Americans should increase their seafood consumption to twice per week. It’s so simple to buy a bag of frozen fish and make a quick, simple and clean meal. It thaws fast and cooks in minutes!

Seafood is considered to be a low calorie food when compared to other protein-rich foods such as meat and poultry. You can consume fewer calories to meet your daily protein needs. It contains a high-quality protein that includes all of the essential amino acids for human health. It’s also easier to digest because it has less connective tissue than red meats and poultry. That’s why it’s so light and flaky! It’s considered to be in low in both total fat and saturated fat. And a good rule of thumb; the lighter the color of the meat, the leaner it is. A large proportion of the fat in seafood is unsaturated, and seafood contains a unique kind of polyunsaturated fat, called omega-3 fatty acids.

There’s a significant amount of scientific evidence that suggests that omega-3 fatty acids may play a role in reducing the risk of heart disease, which is the leading cause of death in most Western countries. Omega-3 fatty acids can make blood less likely to clot and may even decrease cholesterol.

I know I suggested a sprinkle of salt earlier, but sodium is intended for moderate use. That’s another good thing about most seafood. Fish in particular is naturally low in sodium so if you are eating fresh, unprocessed fish you can rest assured you are making a healthy choice.

As a carb lover, I get that the cravings kick in. But I find that following the above guidelines makes me FEEL so much better than when I eat fluffy stuff. If you must have carbs, there really are delicious and healthy options. One of my faves…cut up a sweet potato, spritz it with olive oil, sprinkle on some rosemary and a dash of sea salt and BAKE it. You’ll be amazed at how satisfying and delicious it is. You’ll never go back to high-starch carbs. Add in exercise…even just a 30 minute walk every day (park your car a little farther away from your destination, or take the stairs!) and you’ll have more energy and perhaps even a better beach bod that you’ll  feel good in!